There are many risks in retirement, but, with today’s market valuation, one of the biggest risks is the potential for a market correction while you are drawing income from your retirement accounts.

Academically, this risk is defined as sequence of returns risk; but, most people have no idea this is lurking around the bend as they enter retirement. To help illustrate this risk to pre-retirees and retirees, we developed a simple tool called The Money Cycle.

The Money Cycle is something that we all go through during our lifetime, and there are three phases: accumulation, preservation, and distribution.

The accumulation phase starts early in life. When we are accumulating assets, we are typically willing to take more risk with this money because we have a long-time horizon. Let’s face it, we’re working and will be working for a long time, if we have losses, we have time to make it back. Or, if the market crashes, we can wait for it to come back because we have a long-time horizon before we enter the second phase—the preservation phase.

In the preservation phase, we start preserving some of the assets that we’ve accumulated throughout our lifetime as we get closer to our retirement goals. Now there’s less time to make mistakes with your money or experience major volatility because you’re going to need this money sooner rather than later. This step prepares us for the third and final stage: distribution.

The distribution phase is for both distribution to us in retirement and to our family upon our passing. This is when you begin to draw from what you’ve accumulated and preserved and start taking an income from your savings and investments.

A mistake people make is going directly from the accumulation phase into distribution. They continue to invest as if they are preparing for retirement a long way out, when they are already retired or about to retire. The problem with this is that if you’re taking distributions when the market has big corrections, as it always does, you’re essentially forced to sell your investments for income when the market is down. You can never make that money back and you could deplete your savings much faster as a result. This is how you run the risk of running out of money later in life.

As retirement advisors educating our clients of this risk, it is important to remind people that two of the ten worst one-day drops in the history of the stock market are still painfully fresh in most investors’ minds. Even though the market recovered to blissful highs, we are still seeing large amounts of volatility within the stock market each day. Consumer sentiment seems to be one of nervousness, and this should encourage people to start putting measures in place to protect their retirement.

As advisors, our job is to help protect our clients from market uncertainty and the tendency to make poor financial decisions based upon emotion.

In today’s economic environment, there are three major dangers that could derail your retirement: market risk, interest rate risk, and sequence of returns risk. Working with an advisor that has a clear understanding and ability to navigate these risks for their clients will help bring more peace of mind to those they serve.

The stock market may be peaking right now, but 2-3% + market swings in either direction are becoming more prevalent. The last decade incurred major volatility in the form of corrections and outright landslides. Historic graphs tell us that investors who can afford to wait out drops in the market still prosper. What about the rest?

The danger with market risk is highest for clients who need to tap into their investable assets for income. This can happen in three ways:

When someone is forced to sell a portion of their assets for any of the above reasons while the market is down, it eliminates the ability to “ride out” the short-term volatility and recapture their losses as markets recover. As advisors, we help our clients stay the course and eliminate bad behavior like selling due to emotional panic as markets are correcting, and ensure that a portion of their money they may need to access sooner rather than later is not subject to market risk.

Investors typically flee to bonds as a haven in an uncertain stock market. However, most experts think interest rates have dropped to just about as low as they can get. There is evidence to believe that this trend will reverse soon and we will enter a generally rising interest rate environment. Typically, bond prices decline as interest rates rise. If interest rates begin to rise, and investors need to cash out their bonds or bond funds for planned income to cover an unexpected expense, or due to it being forced income for required minimum distributions, they find themselves having to sell at a lower price. This again creates a risk for clients who may need to access this money sooner rather than later.

Sequence of returns risk describes risks associated with the timing of your investment returns in relation to the timing of withdrawing money. This happens due to a combination of market risk, interest rate risk, and a client’s own need to access their investment accounts.

Now, let’s take a look at how the sequence of returns can impact an account balance while taking withdrawals. Using the same sequence of returns we used in the During Savings example, let’s assume the client is withdrawing the same fixed income of $6,000 per year from these two investments. Remember, each investment experiences the same average return over 10 years, but the difference between Investment A and Investment B is that investment A had losses early in the cycle while investment B had losses late in their cycle. 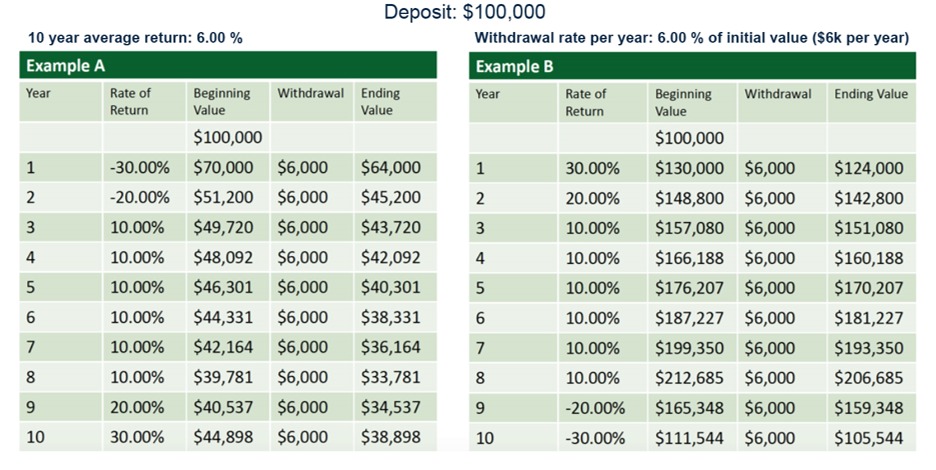 As you can see, since Investment A experienced negative returns in the early years, while the client was also withdrawing their fixed income during that time. They were never able to recoup those losses and severely depleted their account balance as a result. Example B had positive gains during the early years, so there was no adverse effect of withdrawing their fixed income. At the end of the 10-year period, when the two investments averaged the same 10-year return, investment A would leave an investor with the risk of depleting their account to zero and running out of money, while Investment B has a healthy account balance.

This example illustrates the catastrophic impact that the timing of a client’s returns, i.e. sequence of returns risk, can have on their account value for money they may need to access sooner rather than later.

Where is the Market Now?

Today, the market has hit one of those euphoric high points that makes most financial advisors look good and leaves clients satisfied. However, market graphs of the past decades demonstrate that these peaks are at the top of large cliffs. 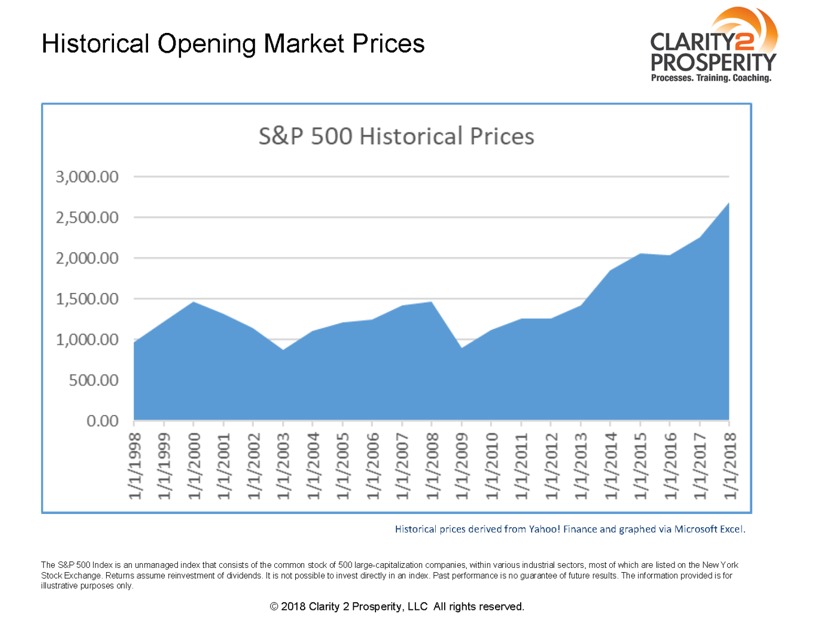 Nobody can really say that they know what the market will do in the next year or decade. Even though it’s fair to predict that the market will keep cycling up over longer periods of time, clients need to be prepared for some days, weeks, months or even years in the abyss.

The problem is most acute for clients who may not be able to wait out a correction because they need money immediately. These clients depend upon their investments for immediate retirement income or have an urgent need to tap into their investments for an emergency. Because of an expected or unexpected need for income or even a sense of panic as markets are volatile, clients could make poor choices.

Even clients who don’t absolutely need to access their money soon can panic during a downturn and make poor decisions. Markets generally correct; however, clients who see their assets shrink overnight might hit the panic button and sell to cash at the worst possible time. They might sell their investments at a low point and turn a temporary downturn into a permanent catastrophic loss. A critical part of an advisor’s job is to offer their clients a strategy to avoid that panic. To do that, advisors need to understand these stated risks and how to mitigate them.

If we look at the historical average annual return of bonds, we can see that bonds have done well in a generally decreasing interest rate environment such as the one we just lived through between 1983-2013. The average return of the Ibbotson/Morningstar Long-Term Government Bond Index from 1983 – 2013 was 10.74%.
If we examine the same historical returns of the Ibbotson/Morningstar Long-Term Government Bond Index during the last generally rising interest rate environment, which lasted from 1953 – 1981, we can see that the average annual return was only 2.48%. 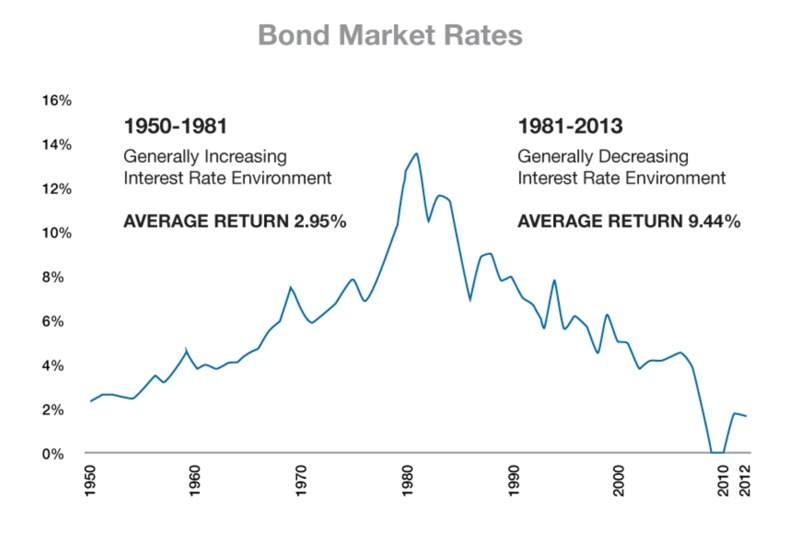 The Causes of Sequence of Returns Risk

Again, sequence of returns risk describes situations that are associated with poor timing of returns when withdrawing from investments. While there are some risks outside of an investor’s control, proper planning can potentially eliminate the damages most of these risks can cause. Consider the three biggest instigators that might force people to draw their assets out at a poor time:

Sequence of Return Savings vs. Withdrawals

Many clients mention yearly returns and average returns over time periods as important indicators of successful investing. That’s not enough information to have when clients depend upon their investment for income. Once again, the critical thing to understand is that two investments could have the same average performance over a certain span of time; however, the sequence of gains and losses can be very different, causing drastic variances in the ending account values.

With any risky investment, the timing of withdrawals can have as large of an impact on a portfolio’s ending value as the amount of money initially invested in it. In many cases, this timing cannot be controlled.

The point is, most people who are saving for retirement, college educations, and unexpected income needs cannot afford to wait for a good time to withdraw their money.

The good news is that there is a way to help mitigate the potential risks outlined in this paper: market risk, interest rate risk, and, ultimately, sequence of returns risk. If you work with an advisor at Alison Wealth Management to properly build a plan using the resources, tools, and concepts mentioned above, you will help mitigate many of the risks mentioned above so that you can live a worry-free retirement.

Want to take the next step in securing your plan, book an introductory 20-minute conversation by: