Most people wouldn't consider contributing to their employer sponsored retirement accounts as a gamble, but when you consider the tax attributes, a different story unfolds.

As with most things in life, there are trade-offs to investing in retirement vehicles such as a 401k, 403b, TSP, or an IRA. The IRS allows a retirement plan participant to claim a deduction on their tax return today, in exchange for full taxation in the future. In essence, you are building a deferred tax liability that must be paid at some point in the future. As the participant, this is a gamble. You are betting that you are in a higher tax rate today than you will be in the future. The way you win this bet is if your combined Federal and State tax rate is lower in the future than it is today, or that your beneficiaries tax rate at the time they withdrawal funds from their inheritance will be lower than your tax rate at the time you claimed the deduction.

Imagine you and I were to start a business together and we are working on our partnership agreement. We agree that we are to be 50/50 partners of the business, but in the agreement I add one amendment, that at any time in the future, I can increase my ownership percentage and decrease yours without you having any say in the matter. Would you sign that agreement and go into business with me? Of course not!

The amendment described above is what the IRS has included in all of our retirement accounts (non-Roth accounts). When we establish a retirement account with pre-tax money, we are entering into a partnership with the government. They own part of the account balance and we own part of the account balance. If you are in a 20% effective tax rate today, then you own 80% of the balance and they own 20% of the balance, but as we all know, the government can increase taxes in the future. As your account balance gets bigger and bigger, you may find that the government increases their share of the partnership to 30%, 40%, or maybe even higher!

I have heard many times from clients that they always thought they should defer as much tax today as possible, because when they stop working later in life they will be in a lower tax bracket. This may be true, so I am not saying that individuals should not participate in pre-tax retirement accounts. My suggestion would be to engage in prudent individualized coordinated tax & retirement planning to determine and project the tradeoff between the deduction today vs. the tax later.

If the client was 25 when each scenario began, by the time they were age 65, scenario 1 would have accumulated $2,928,105 in their 401k. This entire amount is pre-tax money and will be fully taxable when distributed. Scenario 2 would have accumulated $2,283,922 in their Roth account. This money is completely tax free for both the client and their beneficiaries into the future.

Now if the client is in a lower tax bracket than 22% in and throughout their retirement (including when one spouse passes away and they go from MFJ status to Single filer, which creates a high tax burden on the surviving spouse), then the pre-tax savings plan would have been the better choice. If the Federal government increases taxes into the future, or you personally end up in a higher bracket than the 22% bracket, as you can see the Roth choice would be superior. If your tax rate remain the same throughout retirement, your outcome is neutral:

(The exact difference between the 401k and Roth Account)

In addition to just evaluating the pure account balance at retirement, the Roth account has many other favorable characteristics that need to be factored in, such as:

That last point could be a game changer in an inheritance plan. For example, if the client in Scenario 1 passed away at age 65, the taxable income to their non-spouse beneficiary would be $2,928,105. If the beneficiary took the money as a lump sum, it would be taxed as much as 37% based on today’s rates. That could be $1,083,398 in tax, leaving the beneficiary with $1,844,707 remaining. The beneficiary could be eligible to execute a strategy called a “stretch” to spread out their tax liability, but the reality is the beneficiary could still be in a higher tax rate than the original account owner when they took the deduction. This inheritance could even face estate taxes, which are currently 40%, if the exemption amount lowers in the future or the client amasses substantial assets in their estate.

On the flip side, if Scenario 2 client passed away, their non-spouse beneficiary would inherit the full $2,283,922 tax free!

When thinking about taxes later, one must consider their individual tax based on their income, and the fact that tax rates may be higher as a whole in the future. I have seen many retirees reach age 70, who have amassed a large 401k or IRA balance, and now because of Required Minimum Distributions (RMDs), which forces them to take income, they are actually in a higher tax bracket than when they were working. This can be even more common if they have lost a spouse and are now filing as a Single Filer Status vs. Married Filing Jointly.

While none of us have a crystal ball to predict the tax policies we will see over our lifetimes, we can look at historical trends and macroeconomic indicators to help make better decisions around our savings and investing. 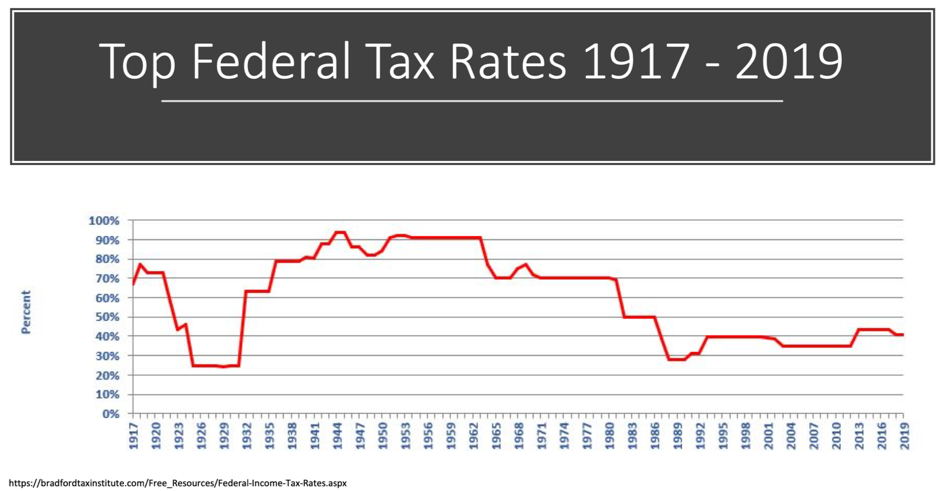 As seen in this chart above, today’s tax rates are near a historical low, even for the nation's highest income earners. If we look back at this historical timeline of the highest tax rates, you can infer that taxes seem to be "on sale."

If we dive a litter deeper into historical tax brackets, you will observe that this "tax sale" is not just for the rich. Across the board we can observe lower taxes. This chart shows the reduction of taxation that has occurred from just 2017 to 2018 after The Tax Cuts & Jobs Act was enacted. 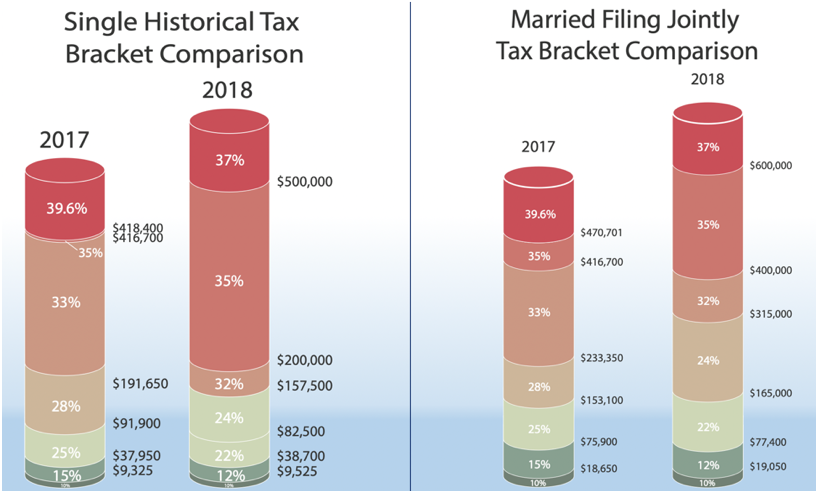 The first thing to note was that Americans were given a much larger standard deduction, meaning a larger amount of income they have the ability to earn without paying any income tax. In 2019, a married couple under age 65 is able to claim a standard deduction of $24,400, while a married couple over age 65 will receive $27,000. That means the first $24,400 or $27,000 respectively of income is tax free!

The second major impact of the Tax Cuts and Jobs Act was that the tax brackets are lower at all levels except the 10% bracket, while also having wider income ranges at every bracket. This gives families the ability to earn more and pay less.

If we look further into the past, you can see taxes were much more complicated. As an example, for a married filing jointly filer in 1980, there were 16 brackets with the top bracket maxing out at 70% for income over $215,400. 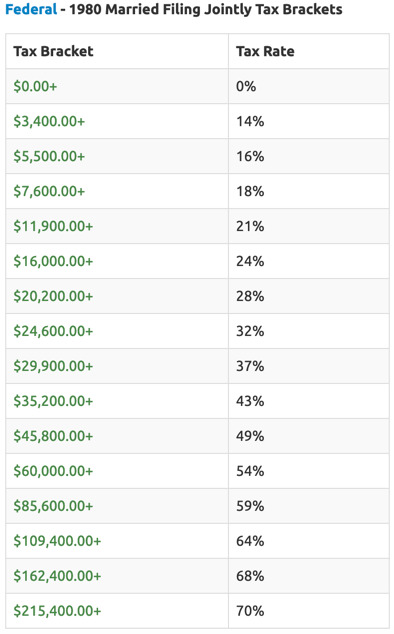 With a historical dollar not being worth a dollar today, we need to factor income inflation in order to determine the net effective tax rate individuals would have historically paid to identify if today’s tax rates are actually more or less favorable. That $400,000 of income back in 1960 would be the equivalent of $3,400,000 today, which still would have impacted several of our clients. 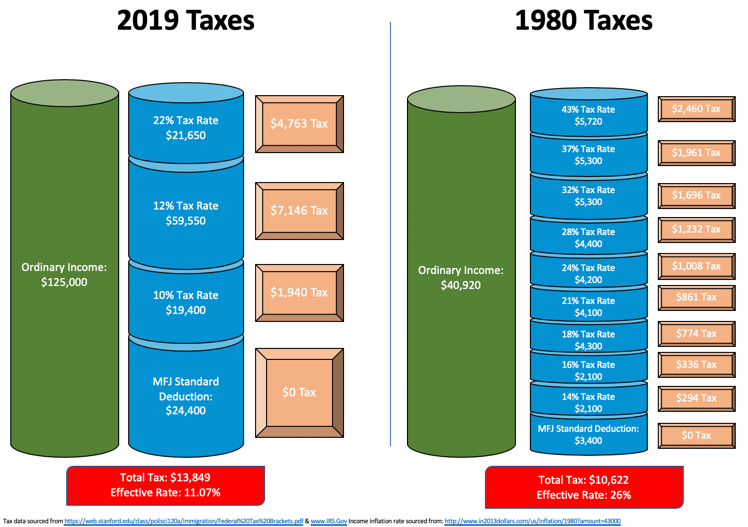 As you can see, taxes were 135% higher in 1980 than they are today on that same inflation adjusted income, furthering the point that taxes may be on sale. This is just one snapshot of one income tax level, but the higher the income, the more dramatic the decrease between 1980 and today.

So, we know that historical tax rates have been higher than tax rates today, but what about the future?

Although the American economy has been booming, there is one dark cloud looming overhead - debt. As I write this article, the national debit is $22 trillion*. That equates to about $180,000 of debt per taxpayer.

There is over $1.5 trillion of student loan debt, in which college graduates continue to struggle to find good jobs to earn enough wages to repay the massive liability they have racked up.

The current interest on our own debt totals over $349 billion!

From a macroeconomic viewpoint, there are two major ways to reduce this debt:

To grow our way out of the debt crisis we face, our country would have to continue to substantially increase GDP. While we cannot predict the future growth of our nation, we do know that we have been on a decade long surge, and many people believe we are closer to the end of this great economic bull run than the beginning.

That leaves increased taxation. Currently we have a President in office who believes in lowering taxes to drive growth. While we don't know if that plan will actually work as planned to reduce debt, we do know that:

The combination of these three things create a once in a lifetime opportunity to engage in tax planning.

Contact us today for a complimentary consultation to learn more about how we can help you navigate these critical decisions.