to meet your immediate, short and long-term goals.

At Alison Wealth Management, we utilize The Bucket Plan® as a part of our holistic planning process to: 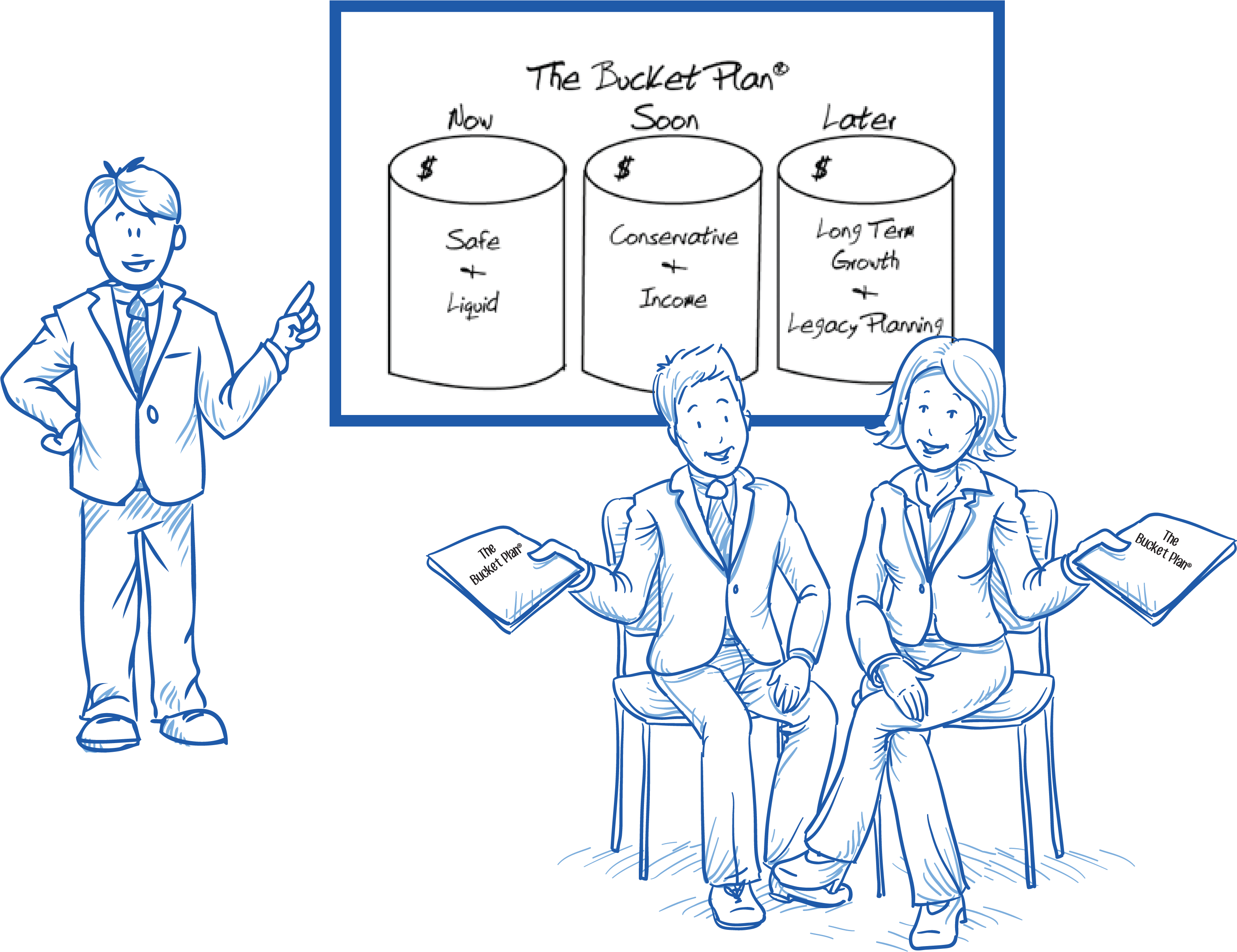 Deliver a financial plan you can actually understand

Step 1: Understanding Where You Are Now

Our first step was to go our introductory process to fully understand Brian and Alice’s current financial picture and what they both wanted to accomplish. Once we had organization around goals, objectives, and current finances, we were able to produce a holistic plan within the framework of our three bucket approach. We mapped out exactly how they can achieve their short-term, intermediate, and long-term goals without the stress and anxiety of having to comply with a rigid budget.

We agreed that the Now Bucket would have three primary objectives:

Because of Brian and Alice’s busy schedule, we set them up on our private client cash management program to automate monitoring to reduce the amount of lazy cash that could accumulate in their checking accounts. Once the cash hit a limit, it would automatically get distributed to the Soon and Later Buckets.

The Soon Bucket is money that Brian and Alice may/will need sooner rather than later. This bucket has a few primary objectives:

We all agreed this would be the bucket of money in which we established a savings plan for the down payment for their future house, as well as a college funding plan for Katie. We then took Brian and Alice through our “Pay Yourself First” process. Together we completed a capital needs analysis based on their current income and expenses to arrive at the number that we could set up as automatic transfers from their checking account right into tax-efficient accounts specifically designed to accumulate assets for the down payment and college savings.

The most important aspect of this plan is it gave Brian and Alice the confidence to put their savings on autopilot, similar to setting up autopay on bills they have, with the flexibility that they can hit pause, reduce, or raise the amount each month as needed. This bucket gave them peace of mind to know they would be able to achieve their short-term goals.

After we mapped out their Now and Soon Bucket, Brian and Alice certainly had the confidence that they could hit their goals of purchasing a new home and funding Katie’s college, but Brian looked at Alice and said, “Geez, will there be anything left for us!” Alice joked and said she could never imagine retiring, proclaiming “I will probably work forever!”

I shared with Brian and Alice that a lot of young professionals feel this way, particularly young professionals starting a new family. There was one major advantage that Brian and Alice had over most of the population, time. The key to the Later Bucket is time. As we discussed the Later Bucket in further detail, we mapped out three key objectives:

Brian and Alice both were proud that they were maxing out their employer sponsored 401(k), which is a fantastic approach for a lot of clients. But when I asked Brian and Alice which is more important, being able to purchase their new home in 2-4 years or funding their retirement, they said they really wanted to buy a home. I gave them a couple options they had never thought of, including dropping their 401(k) contributions down to the company match (to take advantage of the free money their company would provide) and then re-allocating the difference. So instead of contributing the 401(k) max, they would only contribute 4% of their salary. Their employer would also match that 4%, so they were still saving 8% of their salary for retirement. I then mentioned we could take the difference, pay income tax on it (just like the rest of their salary), and fund a Roth IRA.

Alice stood up and said, “Dave, I didn’t think we could contribute to a Roth IRA because our income is too high?”. I responded back to Alice and said you are absolutely correct; a lot of people cannot take advantage of a Roth IRA, and it takes some special analysis to determine if this makes sense for most people. Based on what you told me, there is a specific way you can still fund a Roth IRA through what I call a “back-door” conversion process to contribute $6,000 for both you and Brian each year and have that money grow tax-deferred. At the time we withdrawal that money, it will be tax-free as long as well follow some IRS guidelines. Brian really liked this idea and said he is scared to think about future tax rates based on the massive amount of debt our country currently has. After the Roth IRA strategy, we still had some additional income left from dropping the 401(k) max, which we could then re-allocate to the Soon Bucket house down payment account.

“What-if” Planning
The last component of the Later Bucket is for what I call “what-if” planning. This is something no one likes to talk about, and most families are completely unprepared if it happens. That “what-if” is death or disability. Currently, the only way Brian and Alice can afford that new home in Menlo Park and have a tuition fund established for Katie to attend Stanford is they both have to be able to continue working and earning the type of income they are projected to earn over the next 10-20 years. But what if something happens to one of them? Not only do they lose one income, but the surviving spouse most likely is going to have to cut back work because of the demands of being a single parent, or hire more help which increases expenses.

What if something happens to both of them; who will have guardianship over Katie? How will they afford to provide Katie the same lifestyle as she would have had if nothing ever happened to Brian and Alice? Luckily, there are options to hedge against the “what-if” risks, and if structured properly as part of a holistic financial plan, they only cost pennies on the dollar, and in some cases no expense down the road because they can repurpose those assets if they aren’t used.

Fast-forward 3 years later, Brian and Alice found that home in Menlo Park they wanted to purchase. They called me on a Sunday night and needed cash in a hurry. By Tuesday they had the money from their Soon bucket in escrow ready to close on the home. They didn’t sacrifice the ability to still save for their retirement, and most importantly they didn’t lose any sleep over the previous three years because they had a solid plan in place to handle whatever came their way.

Brian and Alice are just one example of The Bucket Plan in action. Our process can be used at all stages of life for planning your financial future.

If you are approaching or in retirement, learn about one of the biggest mistakes we see people make: 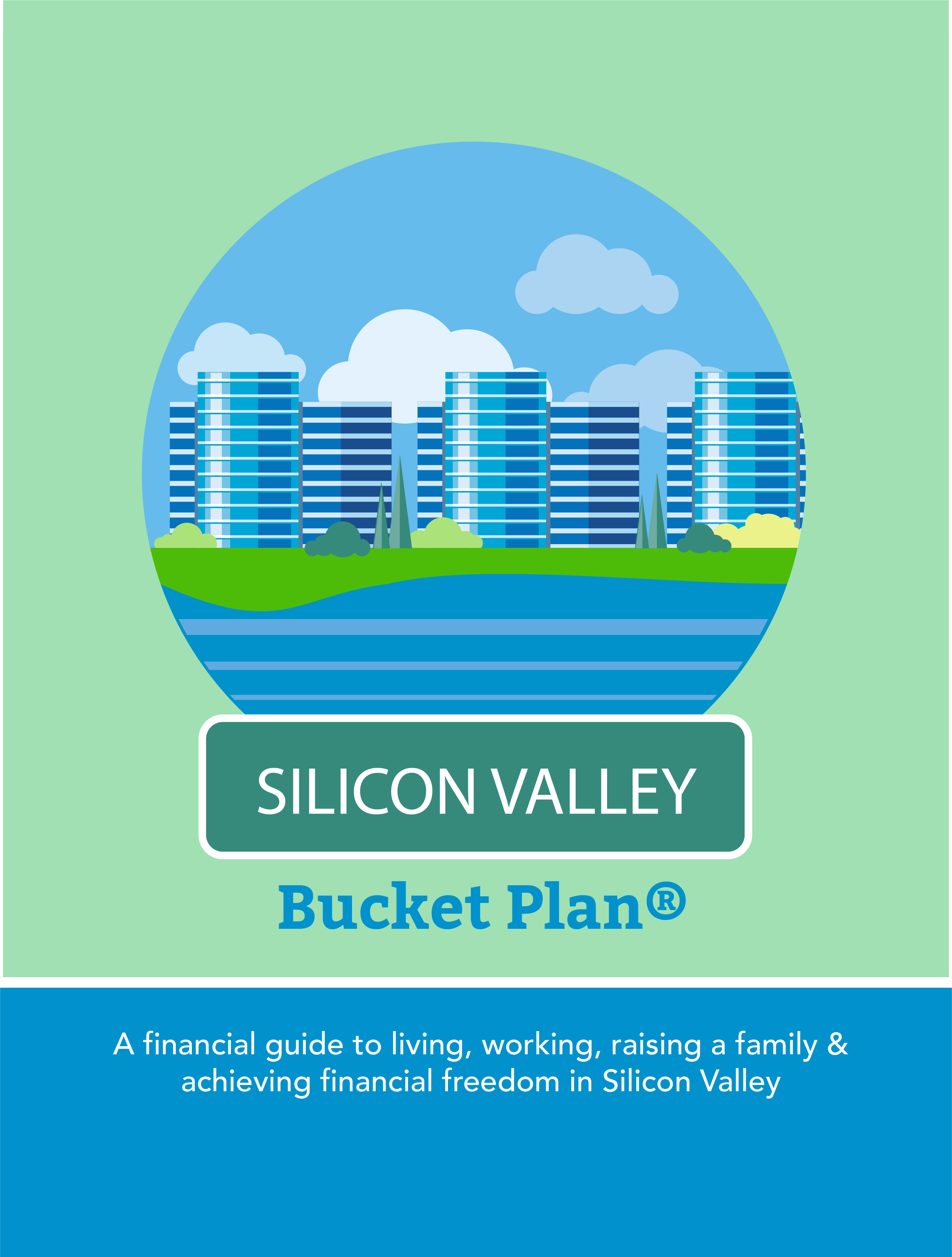 A financial guide to living, working, raising a family and achieving financial freedom in Silicon Valley.

Let's Have a Discussion!